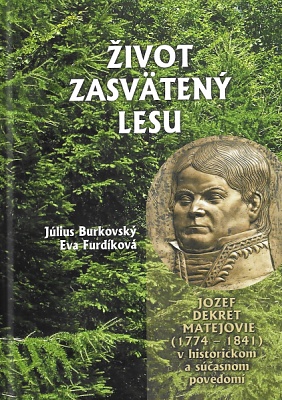 Jozef Dekret Matejovie is the most important forestry personage within the territory of present Slovakia at the turn of 18th and 19th century. In the year 1814 Dekret (40-year old) was appointed a Banská Bystrica k. k. (Imperial-Ryoal) chamber. His progressive methods contributed to saving forests destroyed by mining and metallurgy. From the year 1809 to 1877 approximately 40.000 ha of clear-cut areas were reafforested artificially and other 6.000 ha naturally. Dekret succeeded in afforestation of extreme locations. He introduced a saw into chipping and timber harvesting in lieu of an axe used at that time in Horehronie (Upper Hron river region).

Dekret was born on 12 July 1774 at the settlement Dobroč (one of 13 settlements of the Čierny Balog village). In the 255th anniversary of his birth an interesting publication about this personality was published. The book brings some less known or unknown information from Dekret's personal life and his professional activities, his monuments, genealogy of the genus Dekret, Dekret´s anniversaries and their popularization, of Jozef Dekret Matejovie in literature and bibliography focusing on this well-known personage.